Love this one – love the Bizous Zoo papers. DS all dressed up for a special evening at his school. He looks so sweet to me.

What I love about it is the title – I cut it from mirror card then before I lifted it off the Craft Robo cutting sheet I rubbed on the swirl. I carefully cut the rub-on between the letters then used the surround, over the layout, and stuck the letters down through it. Lifted off the surround and viola! Perfect placement. Really, the photo doesn’t do it justice at all. Def. another all time fave.
perfect placement.

while I am out and about enjoying my kids before they go back to school, I am going to queue up some of my favourite layouts/project so you won’t get totally bored if you visit.

I’ll start with this layout – done for Scrapbook Inspirations, it uses a Crafters Workshop template. What I love is the scalloped edge, which is backed by punched scallops (where I then punched the additional holes in each scallop to give it a lacy look) and love that it is so easy to do. 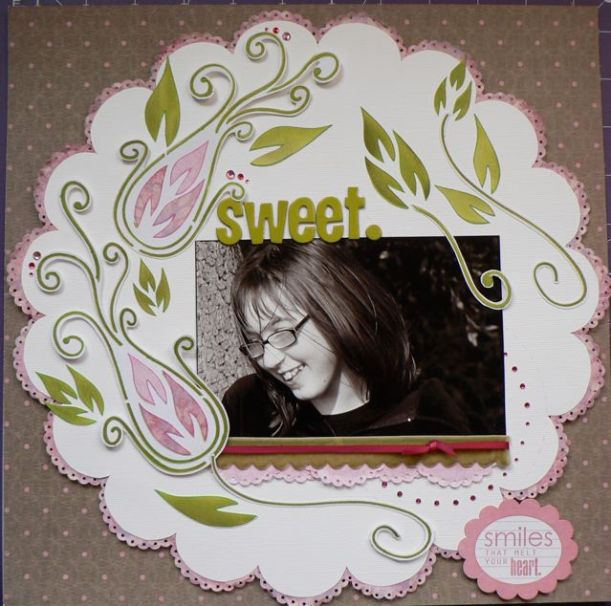 It’s colourful and bright but still simple and the embellishments don’t detract from the photo. One of my all time favourites.

I am so in love with the Jill Penney/Daniel Torrente stamps from Stampotique I can hardly wait for my in-laws to arrive in October with some new images they will be bringing along with them.  Occasionally, I troll the net looking for info about these two talented people.  Their creativity knows no bounds.  I haven’t found much in the way of info but this page has a few links.

And I nearly fainted from delight when I opened the new window and spied DTs adorable (if deadly) clay dolls.  I covet them seriously.  This one, in particular, made me drool, I want it so bad! The picture of pure innocence, albeit with a knife. If this were a stamp, I’d have to have two – one to use and one to save!

Posts will be thin on the ground for the next week as I will be splashing in the pool with the kids, all day every day.  My batteries need recharging and that should do it.

Here is the quick little YouTube tutorial on making the little mini from WOYWW.  Such fun, quick, and easy.  I’m working n another no-sew version.  As I won’t be about much next week I hope to load it ready to appear on Wednesday.  Whether or not I get around to doing the Mr. Linky, who knows?

If you don’t take part in WOYWW, you should – it’s great fun seeing what others are working on and very inspirational.  And I can comment now, so a big WOO HOO from me.  I didn’t manage all of them last week but commented on every desk I visited – and came away with ideas buzzing in my head! No surprise I am still working mostly on my little satellite table as my desk is too full of remnants of past projects. I may have to clean it off for next week’s WOYWW! (stop laughing!) 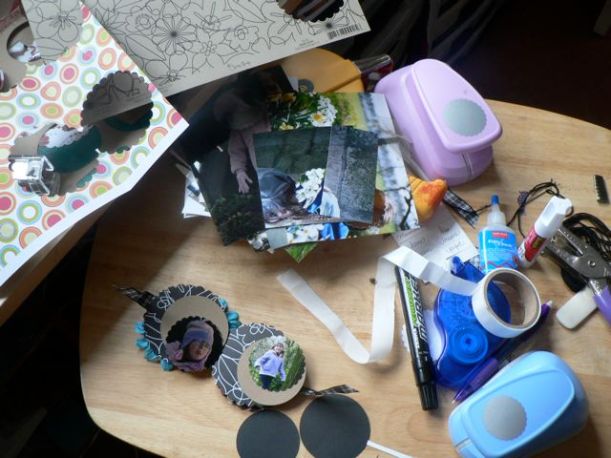 You can just see the little mini I am working on, expanding on the punch-off-the-fold idea from my banner last week (shown complete in yesterday’s post)  and I am loving the simplicity of it.  It works so well for lots of photos that have small central images, or ones that may not be the best shots, not good enough to support a full scrapbook layout but perfect to collect in a tiny mini (using a 3 inch scallop punch, it goes together really fast)

Here is a shot of the cover:

but the innards are the plan for today, once I get done visiting and commenting.  Have a great WOYWW and thanks for stopping by!

I finished the banner from last week – I changed the ribbon to a longer, silky one and added some big gems between the triangles.  DD loves it so that’s good.

And a detail shot:

The punching off the fold idea works really well for lots of punches.  I hope to be well on the way to finishing a little mini using the idea when WOYWW comes around and will hopefully be able to do a little video explaining it.  It works great with any BIG punch.  I know this will come around again when wrapping gifts for that still-too-soon-to-say-the-word December holiday LOL!

As promised, here is the crochet rose pattern I used.

Very pretty, and I did use one, crocheted exactly as the pattern specifies (although I only had a 1.5 mm hook, not a 1.75mm one) on my Masked layout, seen previously.  It is a bit tall, but not completely out of line for a scrapbook page, given the paper flowers I also used. 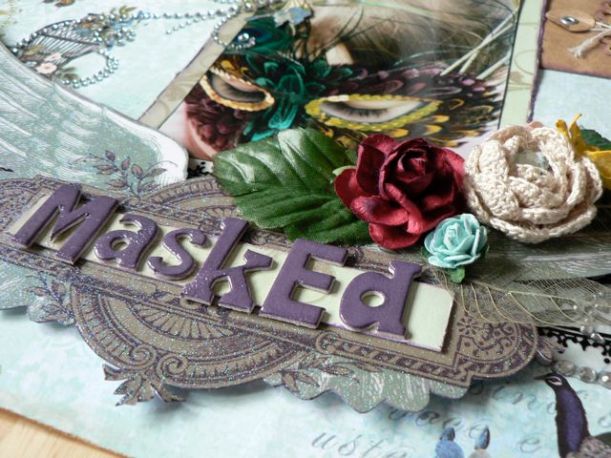 But I have been experimenting with other versions.  Making the rose with yarn, omitting the middle row, and a size E hook, still gives quite a tall flower.

Using the crochet cotton and omitting the middle row gives a flatter flower, perfect for adding to a page, although more pansy-like than rose-like, to my eye.  Using baby-weight yard and the 1.5mm hook, more like 40 chains in the beginning row, gives a yarn flower that is also less of a cupped rose but again, easier to add to a page.

Overall I love this pattern a lot, and think the rose it produces as specified is gorgeous.  It is only a couple of rows, simple stitches, and easy to do.  I say give it a go!

OK, this guy is totally unreal.  He folds complex origami shapes from one dollar bills.

You can see a tutorial (actually a series of them!) on folding the Koi carp here.  And you can see more of his amazing work on DeviantArt here.  It seems to be struggling to load for me at the moment but I hope it will be OK in a bit.

From the press release here:

BP Saturdays: Loud Tate is a free annual art and music event at Tate Britain, run by young people for young people. Tate Forum, Tate Britain’s youth group, has put together an exciting programme of creative workshops dedicated to 15-25 year olds, from fashion to digital media, art to music. There will also be a range of exciting live music performances. For this year’s event Tate Forum have come up with the concept SUPERminitinyBIG and themed workshops to explore ideas of scale, hierarchy and the unmeasurable.

Music acts will include live performances from Ebony Bones, sets from Ramadanman dollop DJs, and the Rinse FM Academy create sound in response to Fiona Banner sculpture. As well as this, Platform magazine will record their “Boiler Room” radio show live on the day,

This is the event I mentioned in a past post.  Dh wrote the Melodala app that is being used for this event so we are all heading in to London to support him. It sounds like a fun free day out so if you drop by be on the lookout. I’ll be around.

If you came expecting the crochet flowers, I have been making variations and will post them, and the pattern, on Monday.  I still have a few ideas for how to make them a bit thinner for scrapbooking and minibook applications.  I promise to finish them up tomorrow so I can post a variety of samples Monday!

Last week I had a little minibook page lurking on my WOYWW desk but in the end I really felt it needed a more substantial treatment so I switched to a 12 x 12 layout.  A photo of DD, wearing a mask we bought her for one of her school plays.  She was dashing by be when I snapped the photo, hence the unusual angle.  But I love the photo and although I have made a layout (many years ago) using other, more recognizable shots from the same day, this photo never seemed to fit anyplace.  Now it does, in a very OTT layout that is embellished to within an inch of it’s life!

a couple of fun things – I used clear TAPE  (Heidi Swapp, maybe?), which I have a lot of but always hesitate to use because getting it stuck down smoothly is hard for me.  I stuck it to a bit of vellum (and it did allow a bit of pulling up and sticking back down) which gave it a different look.  I like it.  And the little crocheted rose – I found a great pattern which I will link to, probably tomorrow.  I’m experimenting with a few variations and if I get time I want to make some other samples to include.

I like the wire fronds with beads stuck in place with Diamond Glaze, something that struck me while struggling with the darn birdcage earlier.  I have a lot of wire and a lot of beads so this will possibly show up again. 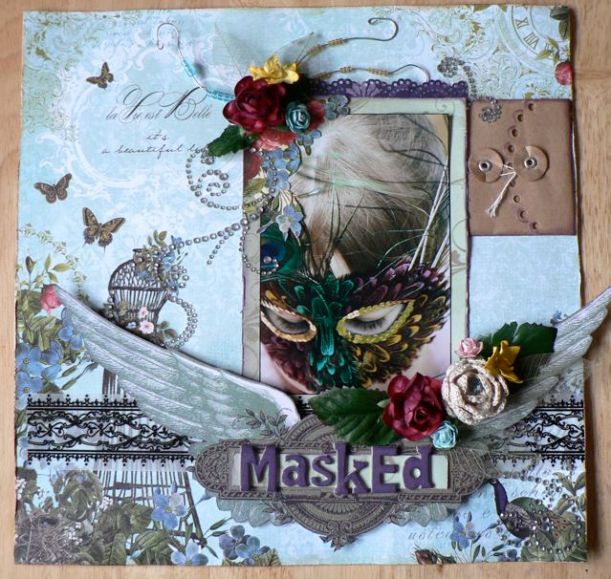 Those letters are from a tub of WRMC double-churned alphabets.  They don’t punch out of the surrounds well (I don’t think) and always look a bit rough, but by sponging on some Distress Ink and clear embossing, they look a lot better.

The background and the corner of flowers over the photo are from Websters Pages and the big wings are from the Caio Bella paper pack.  Oh, and I used some skeleton leaves (remember when they were all the rage?) that I unearthed.