This week the SDC challenge is a colour one, yellow, orange and purple.  Funnily enough I used those colours for an OLD challenge, using iris folding (just about the only iris folding I have ever done!) 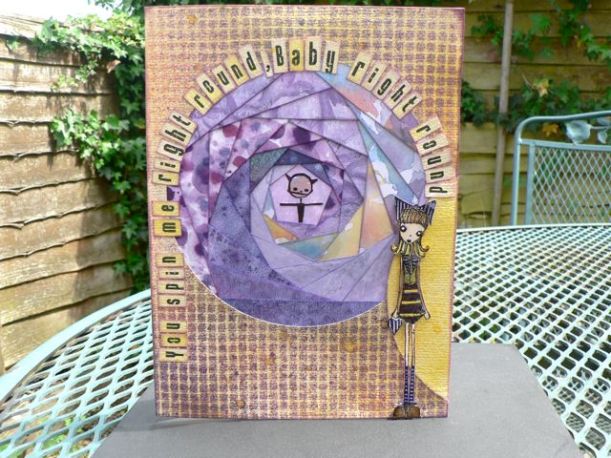 That was SDC 8 (!) and PURPLE.  This challenge is 111.  I’ve not done EVERY one but I have done a LOT of them yet never once have  I won the draw.  To be honest I’m not even sure if I am eligible – or in fact if it would be worth winning – as I live out of the USA.  It would be lovely if the winner was outside of the USA and were able to collect the “prize” from an in-country shop that sells the stamps.  I so need some new ones but haven’t been able to do mu usual $100 order delivered to wherever we are in the USA.  But my in-laws are due for a visit in November so there is hope.

Anyway, here is THIS challenge project.

It’s another note card holder, but resolving one problem with the usual one .

It always irritated me that if you pick up the original one, and by chance turn it upside down, all the cards and envelopes fall out, due to the opening being at the top. This way, with the opening in the middle, that doesn’t happen.  BUT, the stuff does tend to shift towards the middle/spine when you open it, although I guess I find that preferable to them all tumbling out on to the floor!

Really the only change you need to make is to make the bottom flap equal to the middle section.

You still cut away the sides, it’s just a bigger area!  This also solves the other niggle I had, which is the pocket, when attached in the common way, by the little side flaps, tends to let the cards catch on the flap.  Or at least it does for me.  Making the pocket a solid piece, attached at the back, makes putting in and taking out the cards just a little smoother.

Then I made a set of note cards.  I was looking for some “clean and simple” way to make cute notecards and that left out my USUAL method of dealing with the Stampotique images (Copic colouring) and making the Word Search printables gave me this idea.  It may need some refining, but I like them well enough the way they are to post them. 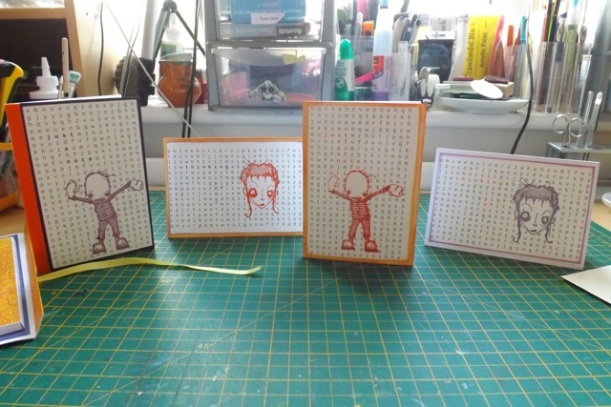 A close-up may help you see better what is going on! 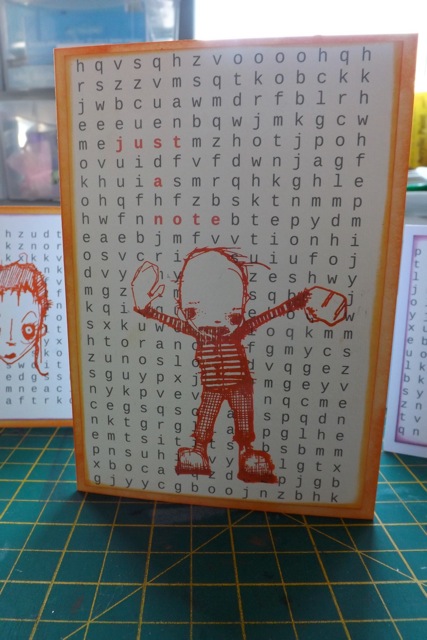 The process is actually easier than you may think, and I will try to work thru it and capture the steps for you then add them tomorrow for WOYWW, as I have some other ideas for the technique and that is def. what will be on my W on W!

Managed to finish the SDC for the week – paint!

I chose the theme for this week’s challenge in honor of my amazing grandmother. She can paint with any medium, and so can you – acrylics, watercolors, daubers, whatever your little heart desires. Just use same sort of PAINT on your project this week!

So the interpretation of PAINT is quite broad, thank goodness, and I was able to try our a few things that I think work well and a couple that work less well.

Here is the card front: 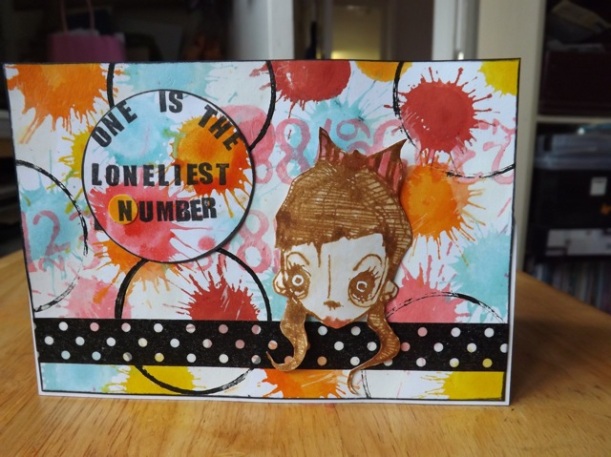 The “paint” I used was the Distress Stain daubers, and a little black acrylic paint.  The background is dauber splats (you know, just thumping the sponge tip down on the paper with FORCE to make a splat!), the black circles are an old lid dipped in black paint, and the number strip and the girl are both made by using the dauber directly onto the stamp.

The girl had most of the surface daubed with Vintage Photo (except her lips, which was, unsurprisingly, Worn Lipstick) then stamped.  I let is dry, a bit, then used a water brush to spread the colour into the white areas.  I added a smidge of Antique linen to the brush to do her face.

I thought it turned out great, so then tried to do a second head, to complete my card idea, using a mix of Mustard Seed and Vintage photo on the stamp.  Not so good a result, but just about acceptable: 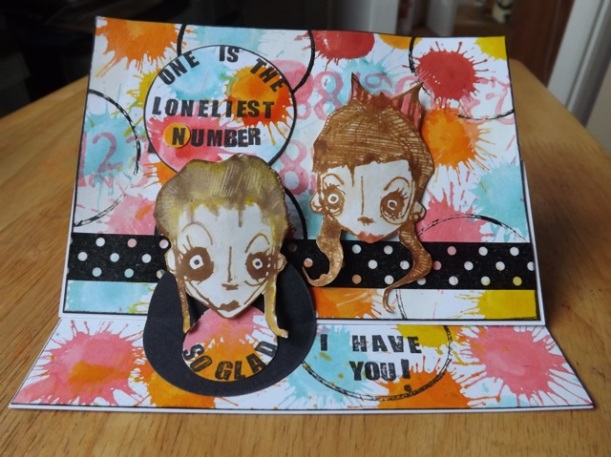 I think the yellow dauber was maybe too wet, because I tried doing the brown first than LIGHTLY touching over it with the yellow, aiming to get the brown lines, but the yellow just ran, a bit.  I think a better method might have been to do the brown, let it mostly dry, then paint ever so lightly with the yellow.  But as I always say, I make the mistakes so you don’t have to, and not showing the first attempt is disingenuous.

As you can see it is an easel card.  The send figure is inside, but appears to be on the front once you engage the easel effect.  I also think, had I had my wits about me and slightly smaller stamps (or maybe a bigger circle) I would have made it SO THANKFUL so it became a THANKSGIVING card instead.  Hindsight is always 20/20 isn’t it?

Man, I so need some new Stampotique stamps…. Is Santa reading?