Well, I soldiered on. And I finished, but am I happy with the end result? Maybe.

Yesterday I was a t a place where I could have stopped but I still needed to add a few layers. I began with some dark purple ink drips.

That, and more stamping and stencilling, added back a lot more darkness and chaos. But I decided not to give up on the adding-white-back idea

and added some creamy white brush and brayer bits then a bunch of finger-dots of brighter yellows and creams. Of course I didn’t grab an in-between shot, but I did grab a shot of the printed elements that would top the page – I had exactly three stamps of bees, in graduated sizes, so I went with those.

I was looking at words that focused on a journey, with purpose

and in the end decided on:

Quest. The quote is meant to shown that a journey that is a quest is not meant to be a short one. It requires many steps, much distance and input from many sources.

Do I love it? Probably not. But it says what I want it to say, if works pretty well as a warm-up, and that is really all it is meant to do. It taught me a little more about how I “follow” a class and maybe how I might do so differently in the future. And it made me look at the LifeBook classes and review the ones so far to really assess any that even vaguely appeal, to see if I could do them and either learn something, or make something I like. The jury is still out on that one.

Oops. Almost forget! The tip about gel medium is this. I was running out of my usual matt medium and when I went looking (at the height of the pandemic) for some online, I found the only thing available where I already had money to spend, was extra heavy gel medium.

It is, I think, meant to stick quite weighty things, like my mate Debbie would use for her art. But I found that a large tub like this could be used slightly watered down in my smaller tub as normal consistency gel medium OR watered down even further to a more liquid consistency to be used as a glue, like I used for sticking intricate die cuts with the gel plate or added to a fine-tipped bottle for use as normal glue. Because it is matt and dries clear it is a really great option for sticking things where the glue might seep out and mar your project. The cost of this big tub, whgich I have had for 18 months at least and have not made a dent it, was way less than the cost of the multiple tubs of normal weight matt medium that I would have used in the same time frame. My frugal tip of the week! Hope it is useful. 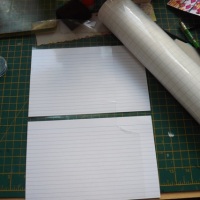