My room is much cleaner than it has been, thank goodness.  Or maybe I should say at one point this week it looked pristine but as soon as I started working on something it swiftly went to hell in a handbasket.

One thing I have been super keen on is using up old supplies.  No, using UP is not what I mean, just USING.  I bought stuff a while back that I never even opened.  And in the intervening months (years) there were newer, maybe better, similar products.

I spotted a video on using Colour Bursts I think they were called, and I immediately thought Those seem very like the Brushos I bought ages ago.  I think I went to the trouble of poking a hole in the top of one or two of the little post to test them and then… nada, zip, zilch.  But while I liked the squeezy bottles as applicators of the newer product, I ALREADY had something similar.

I dragged them out, and also dragged out some tiny bottles I had with dropper tips, that I used when I made alcohol inks by soaking old marker pens in, well, ALCOHOL.  I decanted the Brushos into them and now they work with a squeeze to scatter grains of pigment over whatever. 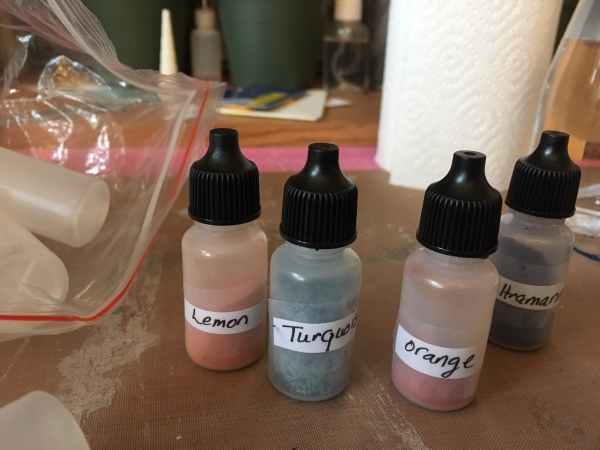 I tested them out on a partially coloured mop-up paper towel that I have a plan for (ooh look! you can just see my very colourful facemask there by the towels)

And about those paper towels/kitchen roll… we ordered some from Costco and hubby accidentally ordered the American version.  We’ve done this before. I recall when we first moved over to the UK lamenting the tiny paper towels.  Now, 20+ years later, the bigger version seems wasteful and less appealing.  Go figure. Having said that, they do mop up more….

A few of the items that I used in my current project, that I have not used either at all or in a very long while. I must work harder on making them an actual design choice rather than  forcing them into a project where they may not actually fit…

AND my sadly neglected Gelli plates have been utilized finally for making some background pages for a project I am using to vent my spleen in.  More on that tomorrow.

The new placement of stuff is working out pretty OK. Again, more on that tomorrow for the desk crowd.

Back to cutting stencils…

4 thoughts on “Little bottles of colour.”