I’ve got the last of my ATCs done although I am waiting on a few addresses (Pearshaped Chris and  Debbie@ Tattered Rocks from the crop, and Bridget from far away) and have a few to deliver next crop (Julia and LLJ) and three to mail this week (Voodoo Vixen, SandraDe and Felix.) Phew. 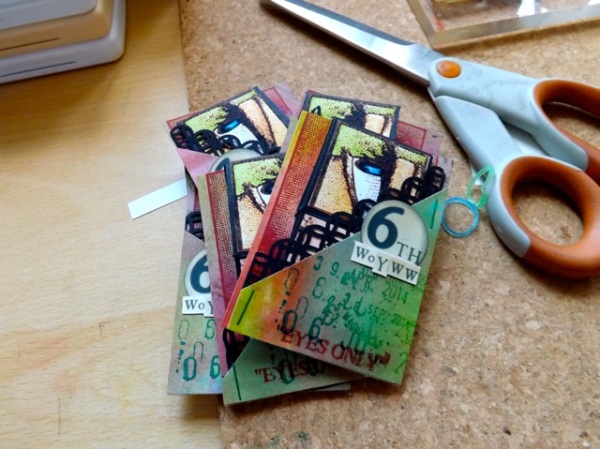 I will share the template and will probably try to explain how it works tomorrow – it’ll take a while.  Just look at all the scoring!

I am annoyed that in the smaller size I either have to use a single loom band as the mechanism (in which case the cube tries to self-destruct during the making) or use two linked bands, which means it sometimes needs a little encouragement to POP like it should.  Especially after it has been stuffed into the pocket on the ATC and take a long trip around to the other side of the world.  But hey ho.  And really, next year I am doing an EASY ONE for sure.

I did have an overall desk shot but it came up mighty blurry so I won’t bother to add it.  The other close up is of the map-fold books I’ve been a bit obsessed with over the last week. Mostly done,  but needing final bits, all except the closed one – that one is DONE done. And I have two more that are earmarked as gifts that will be sent blank for filling.

Now, I did great with visiting last week, at least early on in the day, but once I stepped away I never made it back.  I have a few return visits to complete so I’ll be starting with them this week.  I feel like I should have made more of an effort to have a festive desk, for such a big day.  But honestly the combination of the school holidays, a long overdue family day out, various appointments and scheduled events, the upcoming visit by DS and his GF this weekend, and a bunch of stuff I have probably forgotten momentarily, meant that it was all I could do to get organized to schedule a post.

But HAPPY WOYWW to ALL!  Looking forward to another year of nosy desk hopping, and of inspiration, envy and awe, in equal measures.