Another one of those experimental things.  AGES ago, there was and article in SI about using dingbats to create a title.  I cannot find the article (been thru 2009 and most of 2008 so far and no joy) but from what I recall the title was formed by adding a white word over the dingbat array. Fairly sure it was by a UKS member named Lousette.  I’ll track it down eventually and if I do I’ll add the info on the article.  Perhaps I am forgetting some crucial step, or perhaps my words are too big, with too many letters (I am sure the sample was a two or three-letter word – I can all but see it there, floating in my mind’s eye…) but there just was not enough definition just using the white word to mask.  I added a drop shadow to the white word and that made all the difference.  I also made a couple in traditional colours – well, the green is more celery than evergreen but I prefer that.

Now technically a drop shadow really only belongs on one side but I added a second drop shadow, exactly opposite the first, and made the blur radius lower so there is more a hint of a shadow than an actual shadow.  That defined the top edge of the word better so you can really see it.  Just a couple of words, and MERRY is possibly pushing it a little, lengthwise.

You may recall I used some of those dingbats in my recent OMG it’s Christmas in July ATCs – love the little boy and all the Santas.  I think they might also make cute card toppers, although I am sort of working on a variation that may work a bit better, so watch this space…each of the dingbat shapes need to be placed individually, and they are not all the same font point size, so it’s not something that can be done quickly. 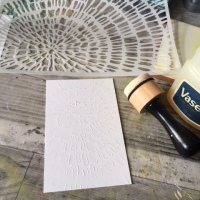