When I posted the printables made from little snippets of my art journal spreads, one of my WOYWW mates, Silverscrappers (aka Elizabeth) commented that she planned to use them for scrapping bits of art from her grandkids.  That prompted a little email exchange, where I suggested to her that it would be more meaningful to actually use the kid’s art for the cards.  She was kind enough to send me some scans to play with.  With her permission, I’ll share the idea but not the download – that is personal to her.  But my hope is it will give you some ideas of how you can do something similar with the kid-in-your-life’s art.

The images I got were not really what I expected – I saw in my head a really colourful drawing or painting, more like an art journal page, with lots of areas that when snipped out of the bigger image would still offer a nice, bright fun block.  What I got was more drawings, with little colour.  I struggled at first.  The drawings are charming, like most kid’s art is, sweet and simple, but didn’t immediately lend themselves to digital manipulation. The first and most obvious solution was to simply resize them to fit a 3 x 4 card.

I added the text, digitally then printed them.  The key here is to make sure you scan them at a high enough resolution that the detail is crisp. 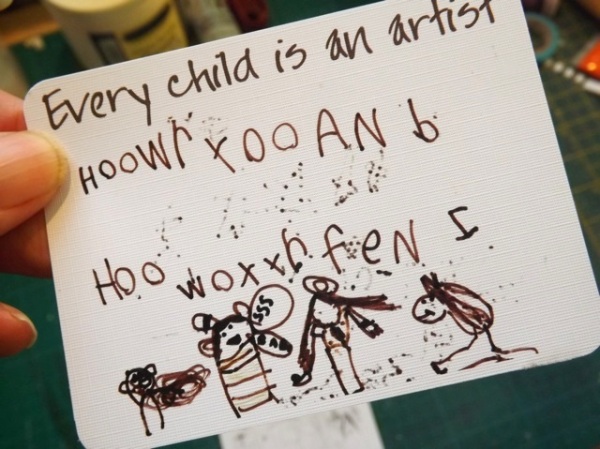 I did print them on textured paper, but they look fine on smooth card too. And for the one above I could have tried editing the scan so just the row of figures remained – that would have made the text I added stand out more, but would have lost the adorable handwriting by the little artist .  And that would have been a shame to do.

I think you can see even her name (added by Mom or Gran maybe?) is readable.  And the detail in these greatly reduced little faces is pretty clear – it’s clear enough on the textured card but better on the smooth card!

For a low-tech solution, just scan or photograph the art and resize it then print it. Cut it out. You can add the text by the old trick of printing the text on plain printer paper.  Stick the card with the art to the bigger sheet with temporary adhesive, positioning it over the printout so the text will then print where you want it.  Run that thru the printer again and there you are! Or even print the text then cut it out and stick it on.  So easy.

All well and good, but I did want to try to do something more like my AJ ones.  That was a bit more of a challenge.  I had to really LOOK at the original art, think about the areas that would be the most meaningful to fill the text.  Basically you are digitally creating a mask (I think in PSE they call it a clipping mask) and uniting the letter and the bit of the art, so the art fills the letter shape.  I know how I do it in Intaglio but can’t tell you how to do it in PSE.

It took some fiddling – some of the bits I snipped out were from different areas of the image, some bits were sized differently to “fit” the letters, and I added a stroke around them to more clearly define the letter. 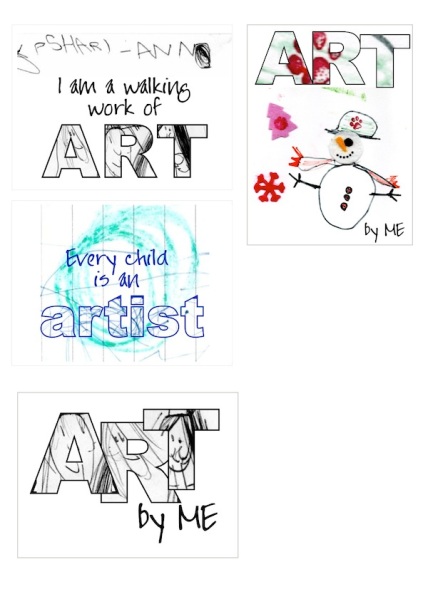 You can see that, for example, the snowman has the large letters filled with the detail from his hat, in larger form. The blue scribble has that detail made larger to fill the background, but the text is filled with a different area of the drawing in a different size.  On one I was able to add the signature, sized so it was readable.  Overall I am pretty happy with the results – and it was fun.

Low tech solution would be to simply print the art then use a stencil to pick out the areas that fill the letter in a pleasing and meaningful way,  outline them and cut them out.  You can layer the large letters over the print of the overall work or use them on plain card.

So will even 10% of the people who read this love the idea well enough to actually DO it?  I suspect not.  But my point is that sometimes, it’s just a matter of thinking outside the box – or at least outside the box of PL cards LOL!  It adds a whole new layer of YOUR LIFE to your book when the decorative bits aren’t just a card plucked from a commercially produced collection that 10,000 other people all have in their PL book. Do you need to sit down and create every single filler card from scratch? Hell, no – that rather defeats the goal of PL as a FAST way to scrap .  But maybe just occasionally you might like to do it.  This is one idea where it might be worth making that little extra effort.  Imagine the kid’s face, flipping thru an album, seeing all those mass-produced cards, then seeing THEIR art treated the same way, printed “professionally” and side-by-side with the commercial filler cards?  Priceless.

Thanks, Elizabeth, for letting me share your grandkids’ art.