Rather scatterbrained today – our mail server has been down for nearly 2 days and the US ISP isn’t addressing it as quickly as we’d like, so worried I am missing out on some critical mail. But I guess that just leaves me more time to get crafty LOL!

So the shot of my desk yesterday showed an experiment.  I got a set of the Inktense blocks.  Frankly I wasn’t super keen on them until I read you can grate them and mix with water to create inks that are permanent when dry.  Now THAT is something I am very interested in.  My plan had been to have a go at this over some modelling paste, but as I had JUST tidied up (massively) and stuff I hadn’t used in ages was still in my short-term memory, I thought  I wonder…? 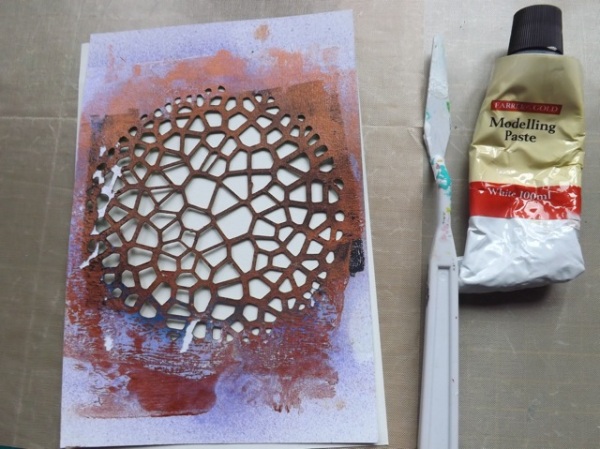 and grabbed my pot of gilding flakes.  My feeling was that the modelling paste, while wet, would grab the flakes.  When it dried, the flakes would not only be stuck, they would be stuck strong. So while the paste was damp (ie maybe 5 mins or so after applying? )  It should still glisten on the surface but if you touch it, it should feel semi-solid 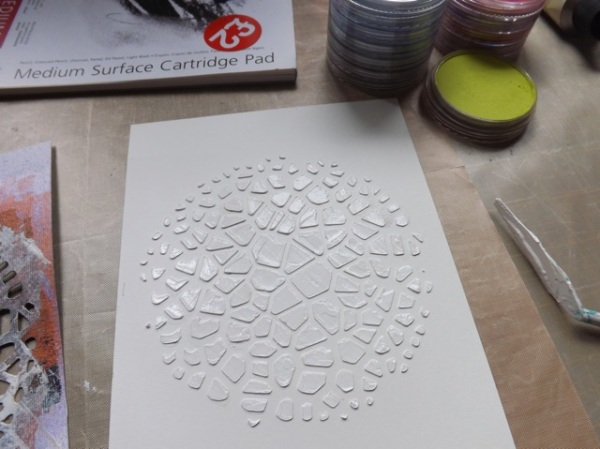 I scattered on some gilding flakes – this bag is one I got ages ago and the flakes are very large, almost like sheets, 2 or 3 inches square.  I laid them over gently, covering the surface on 1/2 of the modelling paste figure.

I left the paste to dry totally then whisked away the flakes with a brush.  Personally, I think that scrubbie thing that comes with the flakes dulls the shine so I don’t really use it.

I think the bare areas might have been down to me not pressing the flakes into the paste or, for the tiny areas, that bit being drier than the rest.  But overall I felt the coverage was good and I was able to whisk pretty briskly and the flakes stayed stuck.

So what I expected to work was to re-lay the stencil then sponge the FlitterGlu over the dried modelling paste then gild as usual.

I did that on the OTHER half.  And it worked as expected. So far so good.  I left it for a while to make sure the paste and glue was dry.  Then I grated up some of the Inktense block, mixed in a bit of water, and make a spray.  Easy Peasy. 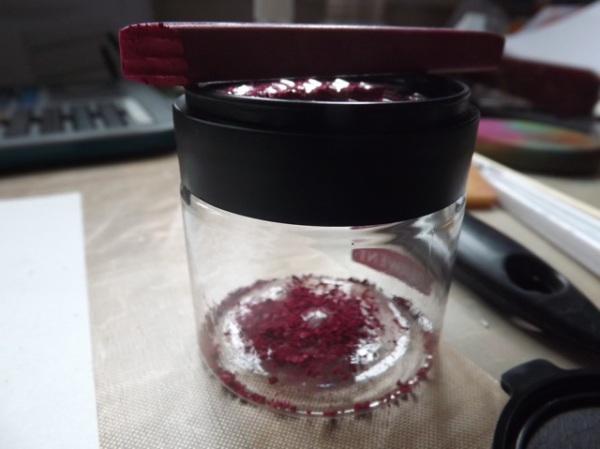 I sprayed that over the gilded area, and let it dry.

Nice and watercolour-y – you can vary the vibrancy by adding more (or less) water. Now here is where it gets odd.  What I hoped to do was buff away the ink before it totally dried (’cause I keep hearing it is PERMANENT WHEN DRY) to reveal the gilded areas.

So what I had read, and seen on videos, is that you can layer other wet mediums over he Inktense and it will not smear.  With this in mind I used a slightly damp baby wipe to wipe away the mist from the surface of the gilding flakes.  Two things to note – first, the flakes that were embedded in the modelling paste stayed put nicely.  The ones applied over the FlitterGlu?  Not so much.

The left is the FlitterGlu.  But I also noted that the Inktense spray DID wipe away, at least partially. Not so water-fast then.

I suspect I need to experiment a little more with this.  But overall, I like the application of the gilding flakes over the modelling paste idea.  It could be quite an interesting technique on an AJ page, certainly for a top layer.  Likewise, I suspect glitter would embed nicely – and if it were a top layer then the FlitterGlu method would work as well, but why add another consumable resource if you don’t need to IYKWIM?  As to the Inktense mists, again, more testing.  Maybe heat setting it for longer rather than just letting it dry might help it remain water-resistant , not sure.  I know it is easy to scribble with the block then blend with a baby wipe and not wipe it away totally so it is at least slightly water-resistant.  And the colour is rich and deep.  But I am glad I had a go at the idea on a piece of paper rather than in my AJ.  I think I’ll enjoy pushing these blocks to their artistic limits, trying out a few ideas I have, to see what works. And I’ll be sure to report back!