Not really.  LOL!  I’m not a person who thinks of themselves as “lucky” – we’ve had too many bad things happen over the years.  But when a bookbinding group I’m part of set a challenge to make a star book with the theme of LUCK I decided to have a go.

The title comes from a song by the Hank Dogs, Lucky Break. I do so love their harmonies and easy, folky sound. Oh and yes, the YOUR slipped a bit but it’s straight now!

The background is a Gelli print that I made ages ago but had no immediate use for.  The shamrock is ringed by some old (and I do mean OLD) glass/mirror mosaic tiles.  They don’t photo well due to the reflection but love how they work in real life. 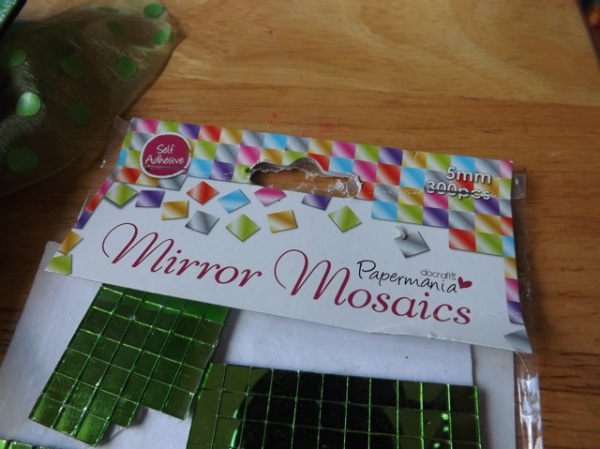 The usual star book construction.  Opened out it forms the star shape – but functions as a flat, flip-able book if you prefer:

The footprint is pretty big, as the pages are 6 x 6 for the largest layer. Each black page has two shamrocks cut out (you may have spied them to the side of my WOYWW desk) and I just set up the file in SCAL and cut them all in about 10 minutes. They are all stamped and heat embossed in black with a swirly sort of pattern and the cut outs are backed with Gelli prints on vellum.  The middle layer of pages is white, with s checkerboard just at the top edge – I wanted the white behind the vellum to enhance the prints.

Maybe you can just see one of the mirror tiles highlighting the word LUCK in each of the quotes. 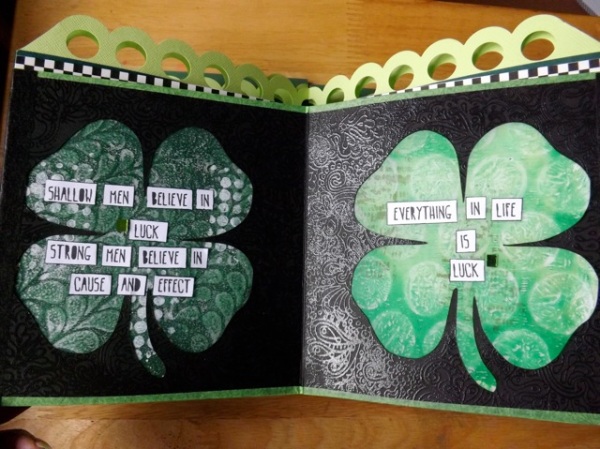 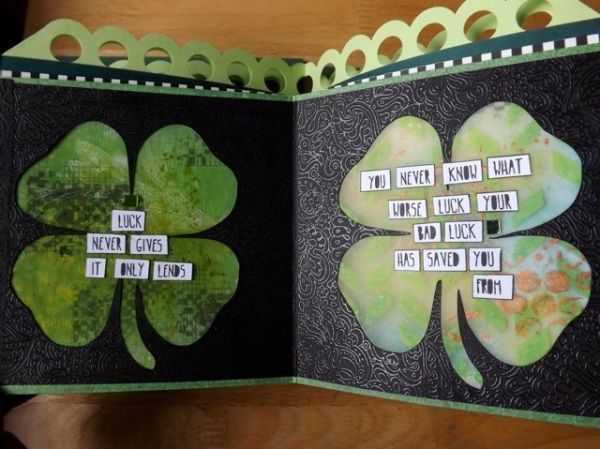 I dithered about outlining the shamrock (either inside the cut-out or just outside the black) with white pen and I may still do that. Problem is outside it, which I think I would prefer, will have to go over the embossing, which might be a bit tricky.

I was a bit lucky yesterday when DH surprised me with a lovely long lunch out – part Valentine’s day (as we have other commitments on the day) and part celebration of the final wrap-up of a year-long battle we have had with a poorly performing professional that ended up causing us untold stress and expense.  It was a total surprise and much enjoyed.  AND he agreed to watch a movie with me – very unusual, especially since, as he is quick to point out, he loves music, and he loves documentaries, but HATES music documentaries.   We watched  Muscle Shoals – about the recording studio in Alabama.  Too many talking heads and not enough music for his liking but I enjoyed it.  All in all a lovely day, even if it delayed my WOYWW visits.

The Gogozombie font?  Well, not entirely sure what the deal is, but I did find that if I type in all upper case the Os print fine with no need to create a .jpg to make them visible.  Still can’t quite work out why  can SEE them but they won’t PRINT in lower case and it isn’t just Intaglio – Text Edit does the same thing!  The left is the lower case version followed by the upper case and you can see on the right how it prints.

So anyone care to give it a go in some Microsoft software?  I’d be interested!

5 thoughts on “Lucky, lucky me”