Well, a few days later and I still have not found the hat I bought for DD as a gift.  I’m safe as I know for sure she is the one family member who doesn’t actually read my blog so I can post a photo.

I knew I wanted a flower detail and I wanted it to be a sort of slouchy hat.  I started with a strip of back-post DCs to get the rim then sewed it into a circle and added SCs in the ends of the rows.  For the flower detail I tested and discarded a number of things, including Catherine Wheels and puff stitches and waves with bobbles. but in the ended opted for a simple V stitch with a popcorn in the middle.  Halfway thru the rom I thought I was doing the popcorns wrong so popped onto the web to look for a quick stitch tutorial.  Imagine my surprise to find THIS YouTube video. I was, indeed, doing it wrong, slipping the hook into the gap behind the first stitch rather than into the first stitch, but that was exactly what she was doing.  Phew – no need to rip it back then.  I went on to see a 2nd video by her, that altered how I would carry on above the row of flower buds.  I had planned to catch the “chains” that connected the buds but the idea to do a longer stitch down into the base of the V made it all look better.  The rest of it is simple DCs, in the round, and I’ve found a good close-the-tube for the top so now it’s just the boring rounds of stitching…. 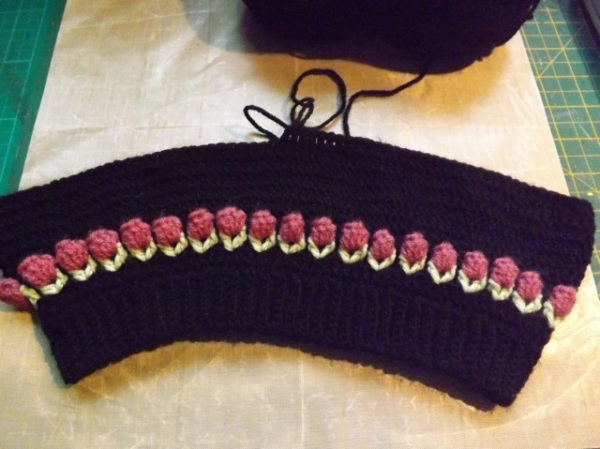 Off to see DD n her final two performances of her Ice Show…..