For the last two years I have had Silkies in the gift bag when renewing my subscription to Craft Stamper.  These little bottles of opalescent paint have sat on my shelf untouched.  But the other day, when playing with the round prints, they caught my eye and I grabbed one to see how it would work out.  I think it worked out well!  One difference is in the FEEL of them.  Unlike metallic or pearl acrylic paint, they have a very smooth feel.  They are also a bit more sheer, which I like.

Since  the bottles are quite small I worried that it would take quite a lot of the paint to cover the plate – although as I said I haven’t found any other application for them in TWO YEARS so just why that even worried me I do not know! But this is just a small bit of the paint, basically one well-loaded brush full daubed around a bit and brayered on:

I printed over an acrylic layer and I like how the paint shows thru.

That was the ghost pull done by loading the plate, laying on the stencil, pulling a print THRU the stencil, removing the stencil and then pulling THAT over another paint print. Another shot:

I have maybe 4 or 5 bottles of this (two the same colour – meh!) but I can see some fun playtime with them later.  Working on a massive craft room tidy up, aiming to re-arrange my window sill a bit to let in more light, now the days are drawing in and darkness comes quicker every afternoon.  The other day I was just playing and playing and before I realized it I was literally crafting in the dark.  You’d have thought I’d have turned on a darn light, but honestly I was so engrossed I just carried on.  DOH!  I d dread the end of BST and darkness at 4 pm. 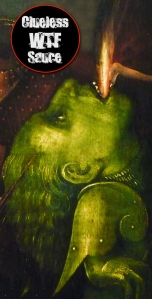 I also spend too much time yesterday playing around with a label for DHs recent hot sauce efforts.  This is not the one chosen but it’s my favourite.  It seems to capture the effect of the sauce perfectly.  I imagine we will use it for some later version, but I’ll have to add the CAUTION: Extremely HOT! warning to it.  He passed out a couple of bottles yesterday and already heard back from two people – one used it both n his Saturday night stew (just his – no other family members were injured in the tasting)  AND a late night cheese toastie, while the other mate and his son had a taste upon their late night return from the pub.  The 1 AM text pretty much said WTF!?

The whole house reeks of peppers, and the capsicum molecules are floating around in the air.  Until we took out the rubbish, I couldn’t go into the kitchen without coughing.  Not sure what I think about this hot sauce making lark of his.  Chili is altogether safer and tolerable.