Not done the SDCs for a few weeks but had an idea when I saw this one.  I was itching to do some stamping, after spending so much time getting organized (no, not done quite yet – got sidetracked!) and one of the stamps I re-discovered was a tiny Stampotique one, that had found its way into a wrong box. More on that in a minute.  I wanted to do more t-shirt transfer art and at first I thought I would use THIS image, and sew on the little charm, to get the LOVE requirement in there.

You probably can’t tell but the image was stamped on the t-shirt transfer paper, then painted with Distress In and water (not too wet!) then I cut him out.

The more I looked at him, and the charm, the more I thought first, that the charm, sewn on, was always going to rattle in the washer (no dryer with t-shirt transfers!) and annoy me.  Second, I thought the BOY image wasn’t what I really wanted.  I played around with one of the BIG HEADS but the one I liked best had lots of wispy hairs, so not ideal for close trimming.

Then I remembered the little men-on-sticks.   I just love this stamp for some reason, and I guess the last time I used it I just stuck it with with my box of homemade stamps, rather than putting it in the drawer with the other Stampotique ones.  Lucky I was sorting and organizing stamps or it could have been months before I stumbled on it!  I did the same as I have done before, inked and stamped and painted, on a circle.  Sequin waste smudges, then I printed the text (reversed) right on it. 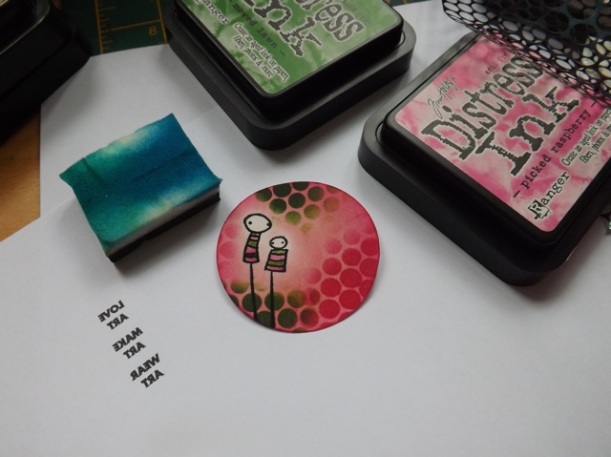 It worked OK, although I think I could have made the text slightly bigger for better readability.  Can you see it says LOVE ART – MAKE ART – WEAR ART?  – that’s how I got the LOVE bit in there!

And on the shirt? Just a small circle near the neck. The circle is only about 2 inches so it’s quite small.  And the framing is wonky, not the iron-on, I promise!

So that’s my crafty fix for the day – now I have to get back to the sorting and filing.