One of the Christmas gifts my daughter gave me was a little fabric stand for my iPad.

The choice of fabric was hers, and I love it because she picked it for me, but she clearly has no idea what my taste is, IYKWIM. 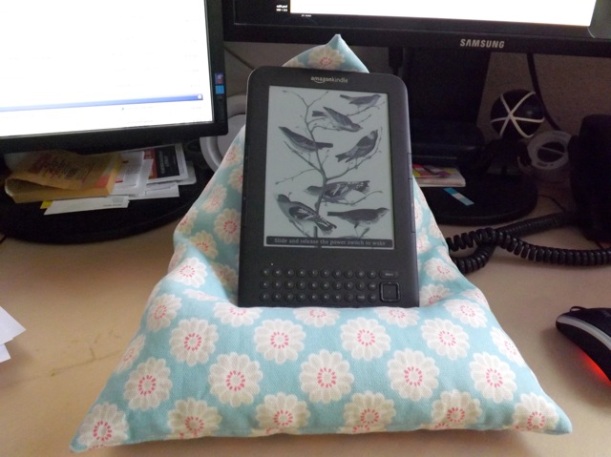 Now I have never been a fan of e-readers.  I vastly prefer actual books.  BUT DH stumbled on a book (The Unlikely Pilgrimage of Harold Fry) that he gulped down in about two days.  Very unusual for him – he reads, but not so much fiction.  He suggested I read it and as it was already on his Kindle it seemed silly not to read it that way.  I did, and I really enjoyed it.  What surprised me is that I liked reading it on the Kindle more than I expected.  At first, the whole way you had to grip it, to avoid triggering a page turn got on my nerves A LOT.  But when I remembered this beanbag, it solved that and other issues.  For example, I read while I eat (breakfast and lunch, which I tend to eat on my own, never dinner, which we eat as a family) and the issues with real books (keeping to book open, turning the pages and not getting food on them, etc) can be solved with an e-reader if you can solve the problems e-readers and meal-time reading (keeping them at the right angle for easy reading.) This little beanbag worked a treat. 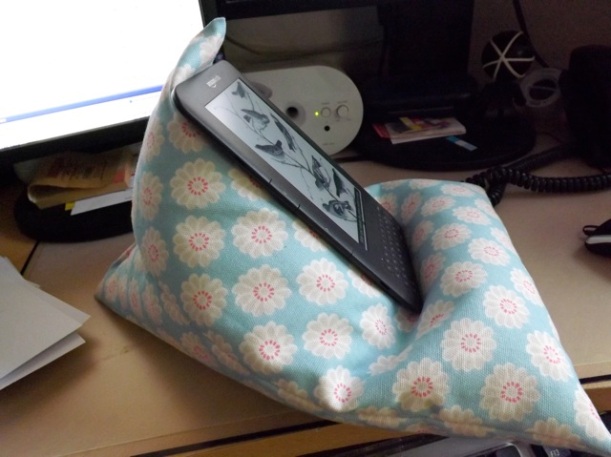 Basically it is constructed like those sour cream containers (US ones, not UK ones) where you take a rectangle of paper (or in this case fabric) and sew a tube.  Sew one end closed, fill with styrofoam balls (the small ones like for bean bag stuffing) then sew the other end closed the opposite.  You can see a paper version on Dan99‘s blog if that is difficult to picture. This bean bag is exactly the same, scaled up.

I think DH intended I would use it for my iPad, but I never USE my iPad, really, unless I am laying down.  Except to Skype DS at Uni, and that is the one case where this beanbag holder is less than ideal as the mic is blocked by the fabric. I should give it a go with a YouTube video or something, to see if the VOLUME on playback is affected like the MIC is for conversation.  If not, I can see using this more often.

Anyway, I’ve been meaning to share it.  The company he bought it from, at a craft fair, is called ebeanies.