I am deeply in to cleaning my space and doing some planning for UKS, but I am starting to see an interest in Halloween already – even my local grocery store magazine had pages of spooky party food recipes so I thought I would quickly make up some samples of a little printable I made.

The problem is that I never know exactly what others have to use.  I was STUNNED bu the number of people who commented or emailed me to say they didn’t have a circle punch!  I don’t think I could scrap without a 1″ circle punch, or indeed all sizes of circles, be that punches, dies, or circle cutters.  So when I was considering these I thought about how they would be useful to as many people as stumble across them.  I decided on a two-pronged approach – first, I did a sheet that has coloured ovals, in case people want to print and cut (or let the kids do so.)  Then I thought if I did then with just the text curves, they may not fit every oval punch or die, but there was a good chance they would work with a few of them.  The only oval cutter I have is the CM one, with the three little cutting pods.  I may be in the minority.  So I did a sheet of just the text curves.  I did them two ways – printing the curves on white cardstock then smudging on Distress Ink and printing on coloured cardstock (left and middle above – the right one is the coloured printable.)

You can play around with the placement, making your pumpkins fatter if you spread them out more, but I overlapped a bit and added a couple of punched leaf fronds and a stem.

Then I added foam squares to the middle oval and layered it on top. 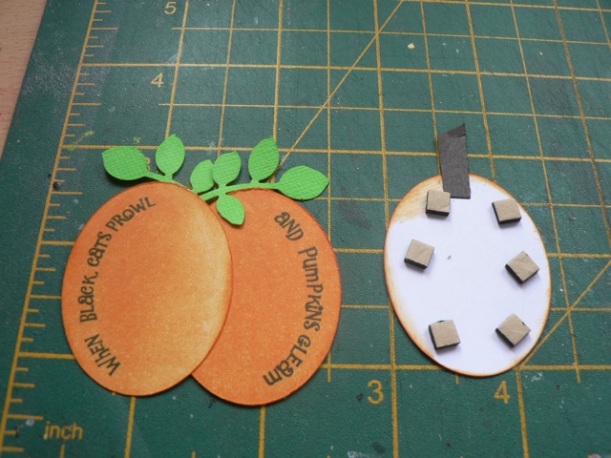 The stem is just a strip  of brown cardstock cut on an angle.  They look fine without the foam, maybe a little less 3D, but if you wanted to make a load of them for treat bags or party invites, that would be faster for sure.

Have fun with them!