When Scrapbook Inspirations ceased publication, I still kept in touch with Jenny, the editor, occasionally.  She carried on editing Papercraft Inspirations and somehow I was still getting copies long after my link with SI was severed.  Usually it was me seeing some really cool card idea on t’internet and sending her a link, saying This might be cool for the mag. Thing is, she usually liked the idea but nearly always tossed it back to me and asked did I want to do the article.  I would always try to squirm out of it, but in the end, at least a few times, I said fine.  Usually the agreement was because it was MY idea and not someone elses, because sometimes when my text submission appeared in the article I felt like it sometimes seemed, as edited, that I was claiming and idea I found “out there” as my own.  That didn’t sit well with me.  And when I would take great pains to seek out the ORIGINAL of what seemed to be a much copied idea (the STAR cards spring to mind) I worried if the URL of the original didn’t make it in the printed mag.

At some point I stopped getting copies of the mag (I assume the finally pruned their “freebies” list) so I sort of let it drop off my radar.  So I was surprised to get an email from one of the staff to say they had some samples to send back!  I had completely forgotten them. So I have no idea when they appeared and never saw the article in print.  But I do have the samples to share with you.  They were made from one of the dahlia printables but one that was a phrase across the five petals rather than a single word repeated. You can download that PDF here.

I am aware that I am all about showing the TECHNIQUE and don’t always follow thru with an actual project.  I’m trying to be better about that.

The first one was just scraps and NOT folded, the circles used to create a flower. It’s so bright and cheery it makes me smile. 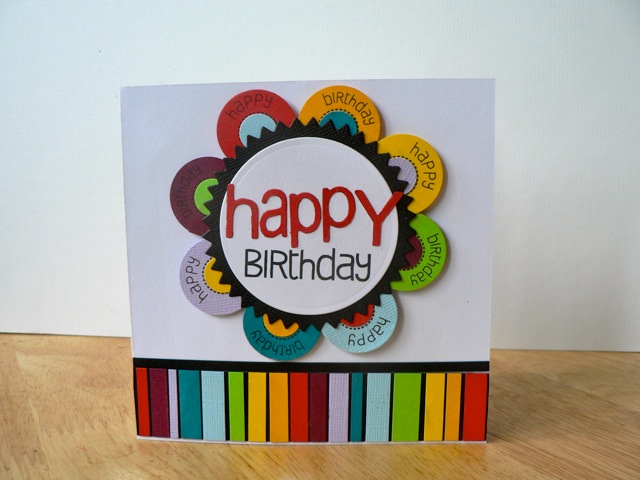 The next was a bit more girly: 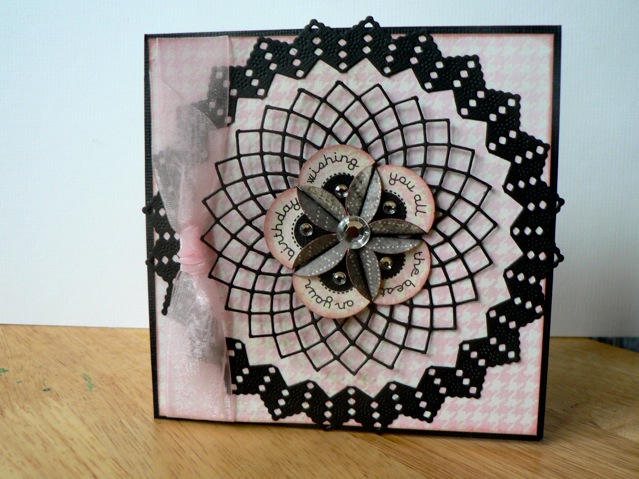 and the last made use of a printed design and had a window, with the dahlia inside.  Possibly my least favourite as it needed something MORE on the front and I was sure they would reject THIS one and they didn’t:

I had previously shared one of the rejects which ALSO used the circles as-is but as a strip – I liked it a lot more than the previous one:

And the original red and turquoise one:

Otherwise, today it is all about the cleaning because I find I am having to leap over things in my office to get from one side of the room to the other and I can honestly not find more than about 4″ on my desk mat to work on.  It is as bad as it has ever been, and all those now clean stamps need re-housing too. My lettering class has slipped.  I am finishing up a tutorial for an online site that I thought I said NO to back in December but with all my dodgy computer issues the word didn’t get through.  So when I got an email saying Nearly Done? Still OK for this? I was a bit OMG! and have been scurrying to sort that as I would be horrified to let someone down like that.  I will also, I think, be chasing the light around from window to window to try to get the best photo I can of something a bit tricky to capture.  More on that in…late August, I think.

So that is me for the day.  At least it’s a bit sunny so the laundry can go out.  Best grab the chance and it’ll be rain by the weekend I fear.